Posted on in
Filling

Canning is now much more accessible for craft brewers since HG Molenaar’s Packaging Equipment division is supporting the CB50 filler and seamer from Pneumatic Scale Angelus.

The CB50 is a six-head filler that integrates directly with the single-head can seamer, is capable of 50 cans per minute, and provides high-integrity seams.

All containers, including cans, are subjected to double pre-evacuation. Product infeed and decarburization are carried out in the tried and tested 2-channel-design. With regard to filling the customers can choose between manually or automatically adjustable filling tubes and volumetric filling.

The capping tower with eight servo-driven capping stations comprising four capping heads for crown caps and four capping units for cans is another innovation of Vipoll. Rinser, transfer systems, and the capper are in sync with the filler; cable routing is designed as a closed system. All parameters can be easily set on the display. Depending on the container type every second head of the capper is activated.

Canning has been relatively difficult for brewers to access until now because they had to order about 250 000 cans per SKU,” says Reinhard Watermeyer, business manager at HG Molenaar. “At those quantities, it’s almost impossible for them to support three or four SKUs . But now they are no longer subject to that scenario because they can fill, seam and label the cans themselves.

Cans offer craft brewers many benefits. They stack and travel easier and better than glass bottles. They are lighter and offer smaller dimensions so they cost less to transport, and more can be moved in same-size containers. No light penetrates the cans so the flavors are not altered and the product does not deteriorate due to light or oxygen. The packaging materials cost is also greatly reduced.

Hikers and picnickers, for example, can take cans with them and leave them to cool in streams before opening, where cans chill faster than glass. There’s no danger the bottle will break and leave polluting and dangerous glass, says Watermeyer.

Sleeved can samples I’ve obtained in the US are beautiful,” he says, “and offer a premium look, and even offer the ability to add textures to the sleeves. It really is one of the success stories of the US canning industry

Angelus is a company with pedigree in this industry,” he says. “They’ve created a purpose-built system, that incorporates the same quality as their high speed systems. And they’re supporting this as an independent operation in their own business so it gets its own teams alongside HG Molenaar’s Packaging Equipment commitment. Plus, the system is field-proven over the past few years. 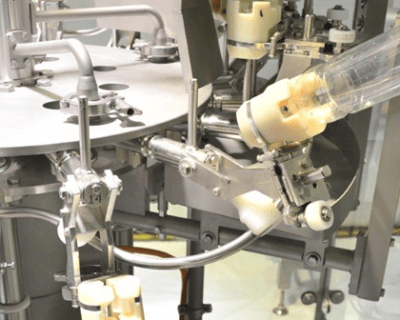 Vipoll presents World’s First “ALL IN ONE”

The Slovenian specialist for filling plants Vipoll presents a world premiere with its “ALL IN [...]
Read more